Rising in Excellence with Michelle Maxey: An Examiner Spotlight 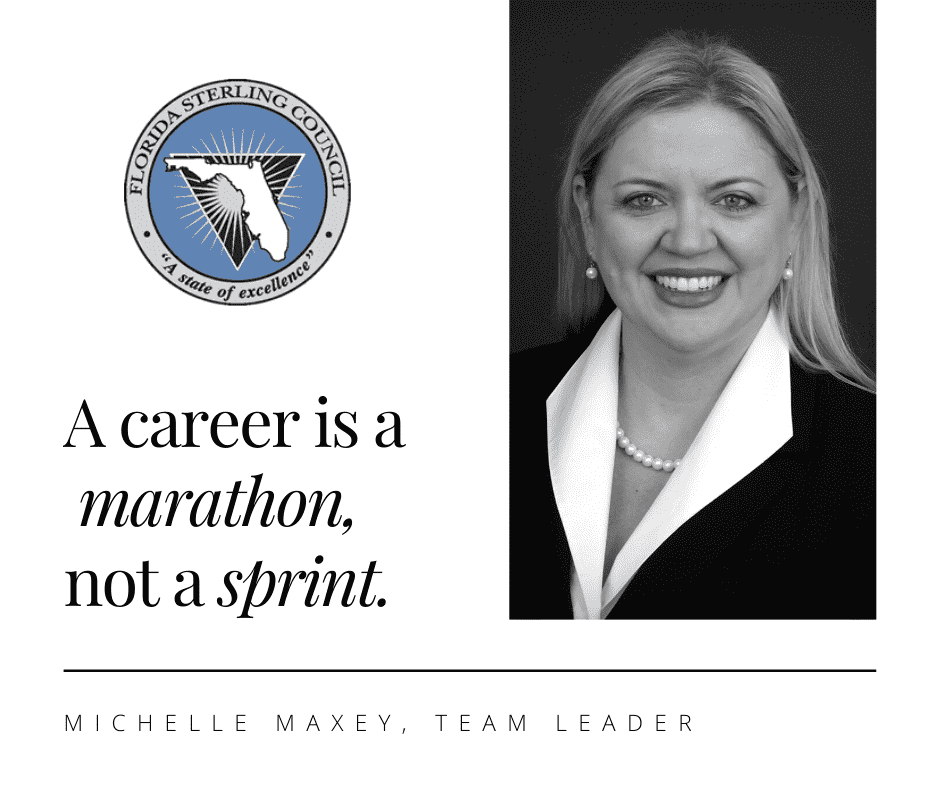 Michelle Maxey, Team Leader, shares her wisdom on how she rose in ranks from high school intern to senior leadership.

Maxey began her career with the District in 1993 as a student. She moved onto become permit coordinator, administrative supervisor, permit evaluator supervisor and Regulatory Support bureau chief prior to becoming the General Services bureau chief.

Maxey is a professional engineer with a bachelor’s degree in civil engineering from the University of South Florida. She is a member of the American Society of Civil Engineers and Florida Engineering Society. Additionally, she is a Team Lead Examiner for the Florida Sterling Council.” Taken from company website.

You began your career at the Water Management District in the early 90s as a high school student intern; now, you hold a senior leadership position and serve as a mentor to several staff, including Hannah Kuzlo, one of our other Examiners. What is the greatest lesson you have learned along the way, and what does it take for a young person to climb the ranks the way you did?

There are so many lessons I’ve learned along the way. The biggest lesson is that a career is a marathon, not a sprint. It takes time to get where you’re going, for people to recognize what you’re doing, and it takes endurance to make it through all the ebbs and flows. I’ve been fortunate to have mentors to guide me and remind me that patience is part of the growth process.

How would becoming a Sterling Examiner help someone who is already established in their role?

I was in my senior leadership role for three years, and with the District for 19 years, before I became an Examiner at the suggestion of our Inspector General. What I gained by becoming an Examiner was looking at out operations from a broader perspective. It also transformed the way that I lead my teams. Developing approaches with my team was a forte, but expanding that to include deployment, learning, and integration across the agency was transformative.

You have been with us since 2016. What inspires you to return every year?

The relationships I’ve developed with the other Examiners as well as the experience of going on site visits is what brings me back every year. I get inspired by seeing how other organizations operate. It helps me be a better leader in my organization.

You have received the District’s highest award of excellence for your exceptional leadership with their continuous improvement program, DIVE (Define, Investigate, Verify, Enact). Can you tell us a little more about DIVE and how the program has improved your organization’s processes?

The acronym itself is a play on Deming’s Plan Do Check Act but changed to be water-centric. Having a background in Six Sigma and the Sterling Management Model, I was asked to develop the program with significant support from our now Executive Director and my then Director. Engaging members of our Leadership Advisory Team, we were able to deploy the program as a pilot using the Kaizen methodology for quick, deliberate change. The first year there were four projects that all achieved success. Now it is a staple and a more robust program including a formal change management program and uses Six Sigma tools. The biggest success was tripling the throughput and improving the quality for digitizing records, which is regulated by Florida Administrative Code.

In 2018, you received the Examiner Excellence Award. Can you tell us a little bit about what that award entails and what it meant to you to receive it?

The award is given to one examiner that has shown excellence and commitment to the examiner process. While at the examiner award ceremony, I was hoping to receive a promotion to advanced examiner. After all those announcements were made, I didn’t get a promotion. I was disappointed. After all the promotions we announced, they were announcing the recipient of this award. I was absolutely shocked when they said my name. I knew the recipients before me and to be classified at the same caliber was an absolute honor.

On a personal note, we are told you recently moved from Tampa back to Brooksville, FL. What inspired you to move back? What is your favorite part about it?

I was approached about an employment opportunity in our Brooksville Headquarters. I had worked in Regulation for 26 years. I looked at the opportunity and realized that it was an outstanding opportunity for my personal growth. It provided another perspective of the District. So, I decided to go for it and got it. Now, I’m part of the District Emergency Management Team, serving as incident commander during emergency events. I also oversee our Fleet, Facilities, Inventory, and Records, which has brought me a completely new set of opportunities for learning. All of these functions integrate with the District as a whole so I’m able to interact with every bureau of our District. As for living in Brooksville, I’m enjoying the slower pace. My commute is a fraction of the time and I see more critters than cars when I drive in.