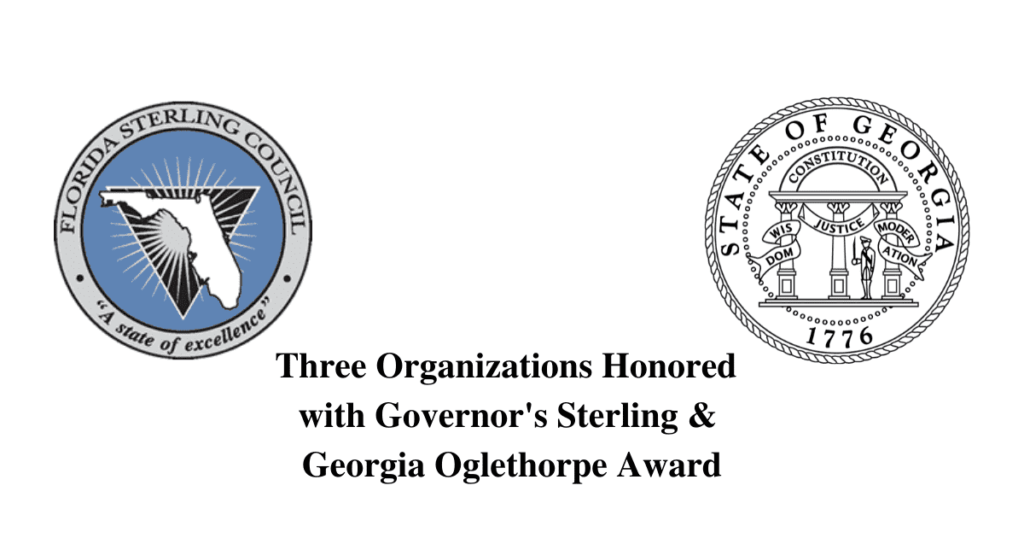 TALLAHASSEE, Fla. –The Florida Sterling Council today announced the Pinellas County Tax Collector and the USF Federal Credit Union in Tampa are recipients of the Governor’s Sterling Award for 2020. In addition, Wellstar Kennestone Hospital in Marietta, Georgia, is the recipient of the prestigious Georgia Oglethorpe Award for 2020.

With these three recipients, the Florida Sterling Council has now recognized 89 organization since 1992. Combined, the two state award processes have recognized excellence for over 50 years, honoring organizations and businesses that have successfully achieved performance excellence within their management and operations. The Florida Sterling Council partnered with the Georgia Oglethorpe Award in 2018 to administer its processes.

The Pinellas County Tax Collector demonstrates excellent performance levels in the areas of customer service, process effectiveness and efficiency, workforce engagement, and governance and financial management. Customer satisfaction for walk-in customers was rated at 98.6% in Fiscal Year 2019. Overall workforce satisfaction achieved 90% in Fiscal Year 2019. Annual expenditures have remained below budget for Fiscal Years 2016 through 2019. Finally, the annual external audit resulted in zero findings from Fiscal Years 2016 through 2019, including zero recommendations from external auditors.

USF Federal Credit Union USF Federal Credit Union (USF FCU) is a full-service financial institution headquartered in Tampa, FL, with more than 60,000 members. The credit union is a member-owned, not-for-profit financial cooperative established in 1959. It serves the financial needs of faculty, staff and thousands of students at the University of South Florida. Since 1990, it expanded to include additional employee groups in health care

The credit union’s leadership and employees actively support, identify, and strengthen its key communities and determine areas of focus for involvement. Notable achievements include contributing over $35,000 in hurricane assistance to victims of Hurricane Michael, second only to a much larger similar institution.

The USF Federal Credit Union is a first-time recipient of the Governor’s Sterling and Georgia Oglethorpe Award.

The organization has established a core competency of “Culture of Compassionate Caring,” which is demonstrated through its sustained world-class performance for patient rounding. For example, the hospital improved the process of discussing the patient plan of care by moving it inside the patient’s room so that the patient and family could participate in the plan of care conversations.

The hospital has consistently demonstrated sustained high levels of performance that exceed relevant comparisons in measures of its core competencies: patient safety and financial and market performance. Mortality rate, a measure of patient safety, demonstrates high performance of observed to expected (O/E) mortalities compared to the top 25% O/E hospitals across the nation with the 2019 performance of 0.60. Central Line Associated Blood Stream Infections demonstrate a positive observed to expected (O/E) trend with FY 2017 at 0.863, FY 2018 at 0.67 and FY 2019 at 0.46, all well below the National Healthcare Safety Network (NHSN) benchmark comparison of 1.0 O/E rate.

Wellstar Kennestone Hospital is a first-time recipient of the Governor’s Sterling and Georgia Oglethorpe Award.

About the Governor’s Sterling Award

Established in 1992, the Florida Sterling Council is a public/private not-for-profit corporation supported by the Executive Office of the Governor. The Council oversees the Governor’s Sterling Award for Performance Excellence and administers the Georgia Oglethorpe Award. The Awards are presented annually by the Governor to high performing, role-model organizations, both private and public, who demonstrate superior management approaches and role model results. The Awards are presented at the culmination of the annual Sterling Conference that teaches participants how to elevate performance and increase productivity. Due to COVID-19, the Awards will be formally presented at the next year’s Annual Conference, June 4, 2021. Nearly 700 executives and professionals gather at this event each year for a one-stop source for education, information and inspiration. The conference concludes with the recognition of best practices and the Team Showcase Champion. For more information, contact Dione Geiger at (850) 922-5316 or visit www.floridasterling.com.